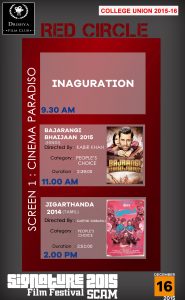 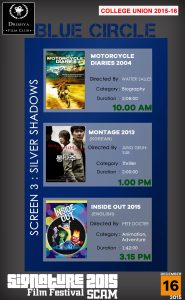 The film club—Drishya—functions  to create interest and awareness among the students in good films. It also helps students to understand and appreciate films better. With this avowed purpose the film club has been functioning in the college under the guidance of an  advisor who is a faculty of the college and led by secretary and president elected from among the students every year.

Films are  a window to the outside  world exposing audiences  to different cultures, languages, people, issues etc.  Wide range of films- Socially relevant, comedy, award winning  are  all  screened regularly on the third friday afternoon of every month in the seminar hall of the college. Members of the club has taken keen interest in film making as well. All aspects of film making like direction, acting, camera are handled by the students themselves. Several short films have been made by the students which have also  received  awards at festivals. The screening of the  movies are  followed by discussion on the finer aspects of the movie making as well as the themes discussed in the movie.

Highlight of the club activities of the year 2016-17 was the successful making of the short film ‘Anu’. ( Available on Youtube) .The film was made by the members of the film club with the participation of students of the college. All aspects of film making were handled by the students themselves. Inaugural screening of the movie was done in the college seminar hall with the participation of all  students of the college and staff on 06- 01-2017. In 2020 a documentary  made by the Film Club  members on the State River of Kerala – Bharathapuzha—titled “Nila’   made headlines and also received  critical acclaim. The documentary  won the 2nd prize at the second Rain international Film Festival held at Kollam,  Kerala in 2020.Club also observes important days like Human Rights day, World Environment Day, World earth Day, Independence Day by organising documentary or film screening relevant to the days observed. Film club members took active participation in the Human Rights Festival -2017 held at Thrissur and in the ‘Campus Vibgyor’ Festival held at Thrissur.

A two day Film Festival named  Signature.2  was organised by the  film club on January 11 and 12, 2017 which was  well  received  by the students and faculty of our college. The festival received good  appreciation for the quality of the  films screened and also for the its  efficient conduct.  Films was showed at three screens  simultaneously which allowed film lovers  to pick their films according to their taste and interest. Films were chosen  for the festival with the  philosophy that it should offer something for everyone and hence it was a perfect blend of the popular and the critically acclaimed movies. It had international and national award winning movies like Jayaraj’s  ‘ottal’ , Pink , Neerja, and Tangameengal(Tamil). National Award winning Kannada film  NaanuAvanalla…Avalu which told the travails of transgender community was the highlight of the festival  and it was followed by a discussion  on the this much relevant social issue.

Some of the  movies screened on  third Fridays of every month.